A blog on business law, politics, and white collar crime

Tucked into the bipartisan criminal justice overhaul package, the language could hamper federal prosecutors’ deployment of statutes that have been used for more than a century against fraudsters from Charles Ponzi to Bernard L. Madoff.  Read more of this DealBook column here:

Comments Off on Going Soft on White Collar Crime

On July 22, I was honored to join experts Simon Johnson (MIT) and Mark Calabria (Cato) on a panel moderated by Marc Jarsulic of the Center for American Progress. Our group followed an earlier panel of distinguished guests Senator Sherrod Brown (Ohio) and Representative Maxine Waters (California) moderated by CAP executive director Neera Tanden.  Click here for a link to the video. Quoting the CAP website:

“In response to the worst financial crisis since the Great Depression, Congress passed a major financial reform bill known as the Dodd-Frank Wall Street Reform and Consumer Protection Act. The law, signed by President Barack Obama on July 21, 2010, made significant changes to the structure of financial regulation in the United States. It gave increased regulatory responsibility and power to the Federal Reserve Board; Federal Deposit Insurance Corporation; U.S. Securities and Exchange Commission; and U.S. Commodity Futures Trading Commission. It also created the Consumer Financial Protection Bureau to rein in abuse of households in financial markets, established the Financial Stability Oversight Council to provide macroprudential supervision of the entire U.S. financial system, and significantly overhauled the rules of the road for mortgage lending. The implementation of these mandates has produced substantial changes in the operation of our financial markets and in the activities of regulators.”

“The Center for American Progress Action Fund is pleased to host an extended conversation about the Dodd-Frank Act, its overall implications for financial market performance and financial stability, and the ongoing debate on whether more change is needed. The event will feature a discussion with congressional leaders who were involved in the creation of the Dodd-Frank Act and who have monitored its implementation for the past five years, and then a panel of experts will discuss how the law has worked and where to go from here.”

Comments Off on Dodd-Frank at Year Five

Still Too Big to Fail: Opportunities for Regulatory Action Seven Years after the Bear Stearns’ Rescue

Avoiding another meltdown depends on the will of federal regulators to use the new powers they were granted in the Dodd-Frank Wall Street Reform and Consumer Protection Act. If they behave as if they are beholden to the banks, we will likely face a more severe crisis in the future. There are six important steps that regulators can take right now without the need for further Congressional action. For more information, read my latest report, “Still Too Big to Fail: Opportunities for Regulatory Action Seven Years after the Bear Stearns’ Rescue,” published by the Corporate Reform Coalition.

Comments Off on Still Too Big to Fail: Opportunities for Regulatory Action Seven Years after the Bear Stearns’ Rescue

Why has the banking industry urged the Supreme Court to take away key tools to fight housing discrimination? I shared my thoughts this week in a New York Times DealBook column:

“In the wake of a recent winning streak with Congress in rolling back reform, the banks now seek a fresh victory at the Supreme Court. The much-anticipated Fair Housing Act case . . . which was argued on Wednesday, does not directly involve banks or even borrowers. It stems from an arcane dispute over the allocation of federal tax credits to low-income housing developments in Dallas. The impact, however, could be much broader. . . .The court’s decision, expected before July, may greatly reduce liability for unfair mortgage financing practices nationwide and limit the ability for the government to combat predatory lending.”

In DealBook this week, I wrote about how the the Federal Housing Finance Agency has directed Fannie and Freddie to allow people who have lost their homes to buy them back from the enterprises at fair market value.

Prior to this directive, former owners had to pay off the full principal balance on their loan, which for underwater homeowners often was significantly more than fair market value.  This policy change is a good start, however it does not go far enough. It  does not prevent families from losing their homes to foreclosure in the first place. What should be done? Read more.

Think the kind of run on Lehman Brothers that kicked off a financial panic six years ago is a thing of the past? Now that the S.E.C. issued its final rule in July, is money market fund reform complete?

Having tackled the persistence of repo run risk in an earlier N.Y. Times DealBook guest column, here’s a take on money market fund reform. Today’s piece revisits the role of money market funds in Lehman’s collapse and contagion. It also highlights a new proposal by University of Pennsylvania Law School Professor Jill E. Fisch — that sponsors of funds with fixed net asset values be required to guarantee the NAV — in other words to “back the buck.” Click here to read.

Comments Off on Post-Lehman: Is Money Market Fund Reform Still Too Weak?

For Better or For Worse? The Fourth Anniversary of Dodd-Frank

Chiming in on the N.Y. Times DealBook blog to mark this anniversary of the Dodd-Frank Wall Street Reform and Consumer Protection Act.  See  here  “Taking Stock of Four Years of Dodd-Frank.”

Comments Off on For Better or For Worse? The Fourth Anniversary of Dodd-Frank

A Second Chance to Help Families Save Their Homes

“It’s a familiar story. Regulator sues mortgage firms, demanding that they stop abusing homeowners facing foreclosure. This time, however, it’s different. The defendants in this case are not banks. Instead, they are the government-sponsored enterprises Fannie Mae and Freddie Mac.”

As the on-sale date for OTHER PEOPLE’S HOUSES nears, I have noticed a few points that deserve clarification and minor typographical errors to correct. Instead of silently storing-up a list of changes to make to the paperback edition, I plan to address them here first. Periodically, I will move up this post up to the top of the blog and add any relevant comments, clarifications and corrections:

Chapter 12, p. 204:  The observation that the Fed “was supposed to use its emergency lending powers to support traditional banks” was meant normatively. As a matter of law since 1932, under Section 13(3) of the Federal Reserve Act, the Fed had the power “under unusual and exigent circumstances,” to lend to “any individual, partnership, or corporation” when such borrower is “unable to secure adequate credit accommodations from other banking institutions.” However, it had not done so since the Great Depression.  As noted in this chapter and later in the book, the Fed once again used this emergency power during our recent crisis, including in the rescue of Bear Stearns and the bailout of AIG.

Comments Off on Comments, Clarifications & Corrections for “Other People’s Houses”

What Tim Geithner Got Right

Next week, with the release of his book “Stress Test,” former Treasury secretary Timothy Geithner will follow fellow bank bailout-era officials whose books seek to shape our views of the financial meltdown by detailing what they and their peers got right — and wrong — in their responses. Here’s my opinion.  Published on May 6, 2014, on the New York Times DealBook blog. 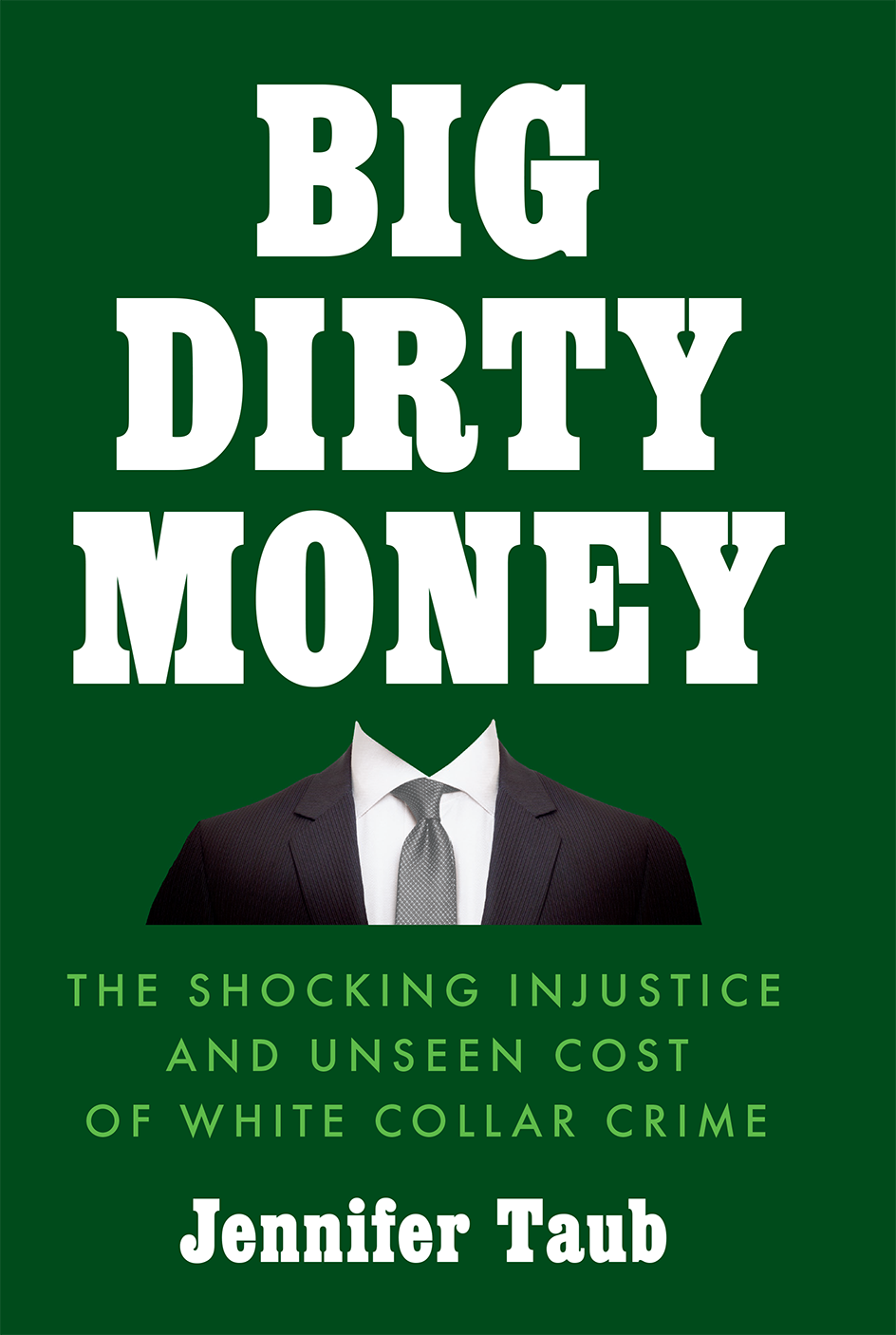 There is an elite crime spree happening in America, and the privileged perps are getting away with it. Selling loose cigarettes on a city sidewalk can lead to a choke hold arrest and death. But if you’re in the 1 percent and commit mail, wire, or bank fraud; embezzle pension funds; lie to the FBI; obstruct justice; bribe a public official; launder money; or cheat on your taxes, you’re likely to get off scot-free (or even win an election). If caught and convicted, say, for bribing your kid’s way into college, you might make a brief stop in a minimum-security “Club Fed” camp. Operate the scam from the executive suite of a giant corporation, and you can prosper with impunity.

This is not victimless crime. Big Dirty Money goes beyond the headlines (of which there is no shortage—Wells Fargo, Theranos, Purdue Pharma) to detail the scandalous ways that all the rest of us suffer when the well-heeled use white collar crime to gain and sustain wealth, social status, and political influence. Profiteers caused the mortgage meltdown and the prescription opioid crisis. They’ve evaded taxes and depleted public funds for education, public health, and infrastructure. The financial cost to victims for fraud and embezzlement alone is as much as $800 billion a year.

Jennifer Taub sounds an alarm we ignore at our country’s peril. The solutions include strengthening prosecutorial muscle, protecting journalists and whistleblowers, challenging the “too big to jail” syndrome, and overturning the growing implicit immunity of the upper class. This urgent book should enrage—and engage—consumers, citizens, and everybody who believes no one is above the law.